of all that panicked flight—
as if the red dusk willed
a concentration of its light—
a falcon on the sill.

It scanned the orchard's bowers,
then pane by pane it eyed
the stories facing ours
but never looked inside.

I called you in to see.
And when you steamed the room
and naked next to me
stood dripping, as a bloom

of blood formed in your cheek
and slowly seemed to melt,
I could almost speak
the love I almost felt.

Wish for something, you said.
A shiver pricked your spine.
The falcon turned its head
and locked its eyes on mine.


And just like that it vanished.
“Mimetic criticism: Poštolka (Prague) by Christian Wiman” by Corina Moscovich
What is the reality of human experience? As reality is the context in which the work is studied, one may think this was a real event in the poet´s life. Mimetic criticism is committed to truth, reality, and the idea that literature, in some ways, imitates life. The narrator is learning through imitation. The life of a human being and the life of an animal... As the falcon, the narrator needs to take a glimpse of his life. As the falcon, he never looked inside their story, an apparent surface story where feelings could not be expressed.
Poštolka is a poem composed of 28 lines, arranged in seven verses. There are nine sentences within those verses. It is written in a simple style. One part of the poem talks about the falcon, another about the narrator´s couple: “ours”, “naked next to me”, and “the love I almost felt” and a third one about the narrator´s feelings in such a confusing moment. 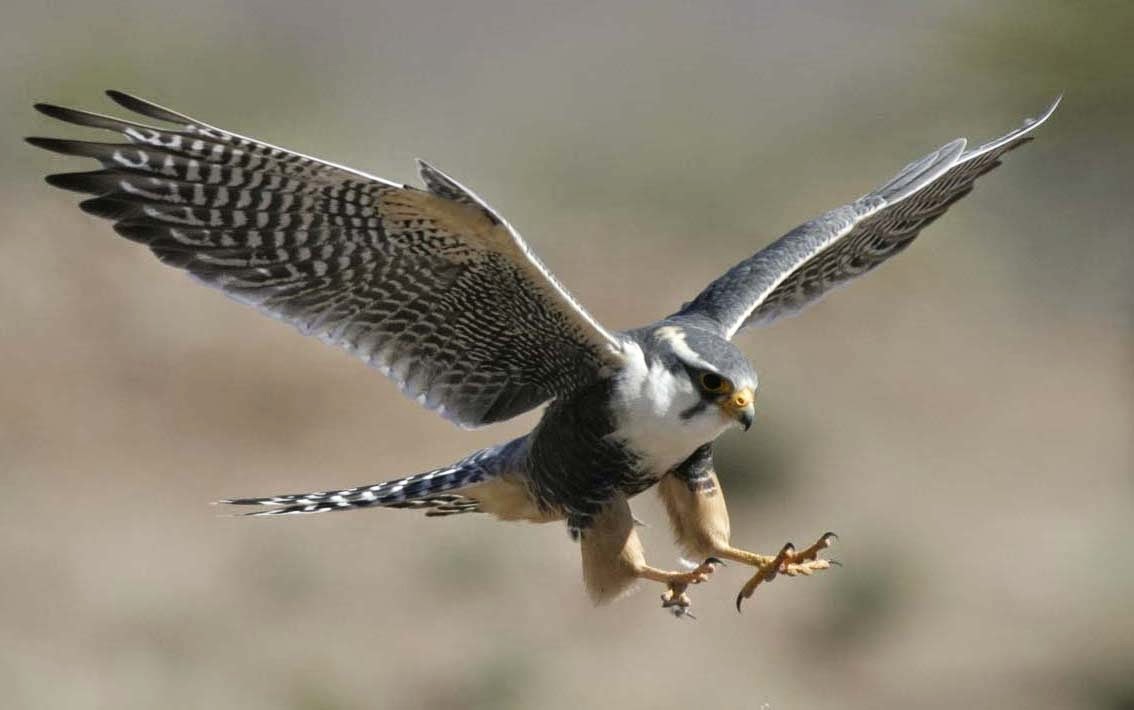 The first two lines give an account of what was happening: when and where. It gives images of the physical contemporary setting: “When I was learning words”, “you were in the bath”, “red dusk”, “orchard´s bowers”, etc. But then the physical world of the two lovers cannot be found so precisely. The 3rd line is a continuation of the action made by the falcon. The fact that the falcon is a diurnal bird helps to make the poem more credible (According to the dictionary, a falcon is “any diurnal bird of prey of the family FALCONIDAD, sometimes trained to hunt small animals for sport”). The 4th and 5th lines give the reader an idea of what is happening between this couple.  The fourth line breaks the poem. The narrator is not alone anymore because he calls her in to see. And she goes next to him. When there is love there is no fear. The 6th line has a fast rhythm. Many verbs that denote action: “wish”, “said”, “pricked”, “turned”, “locked”. The 7th line, on the contrary, has a slow rhythm. Few verbs that denote no action but an end: “wished” (3 times), “would not end”, “vanished”. 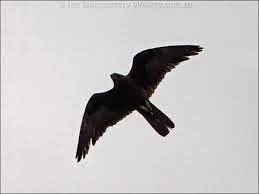 Literature mirrors the world, reality. It is this idea that leads us to view the literary work as a true imitation, reflection or representation of the world and human life. The image of the falcon is allegorical, as the meaning is represented symbolically. It seems the falcon is an instrument to make the reader realize the kind of life this person is having. The poem is a narrative that talks about an event in a day in the narrator´s life: the intrusion and presence of a falcon.
The name of the poem Poštolka (Prague) and the sentence “When I was learning words” made me think of a foreigner in another country. I was surprised to find out that some of my thoughts in my brainstorm were confirmed by real facts. I found out that Christian Wiman, the author, has been a foreign lecturer at the Prague School of Economics. Poštolka is a poem that is better understood with the help of reference sources. Also, the sentence “I called you in to see” gives the idea that the narrator is surprised by the presence of the falcon. The woman was not afraid of the falcon. Probably she was familiar with it. I found out that the peregrine falcon is among Slovakia’s protected species and that there is an organization in Prague devoted to falcons whose website contains a live web camera view of peregrine falcons nesting on Tynsky Church at Prague, Czech Republic. 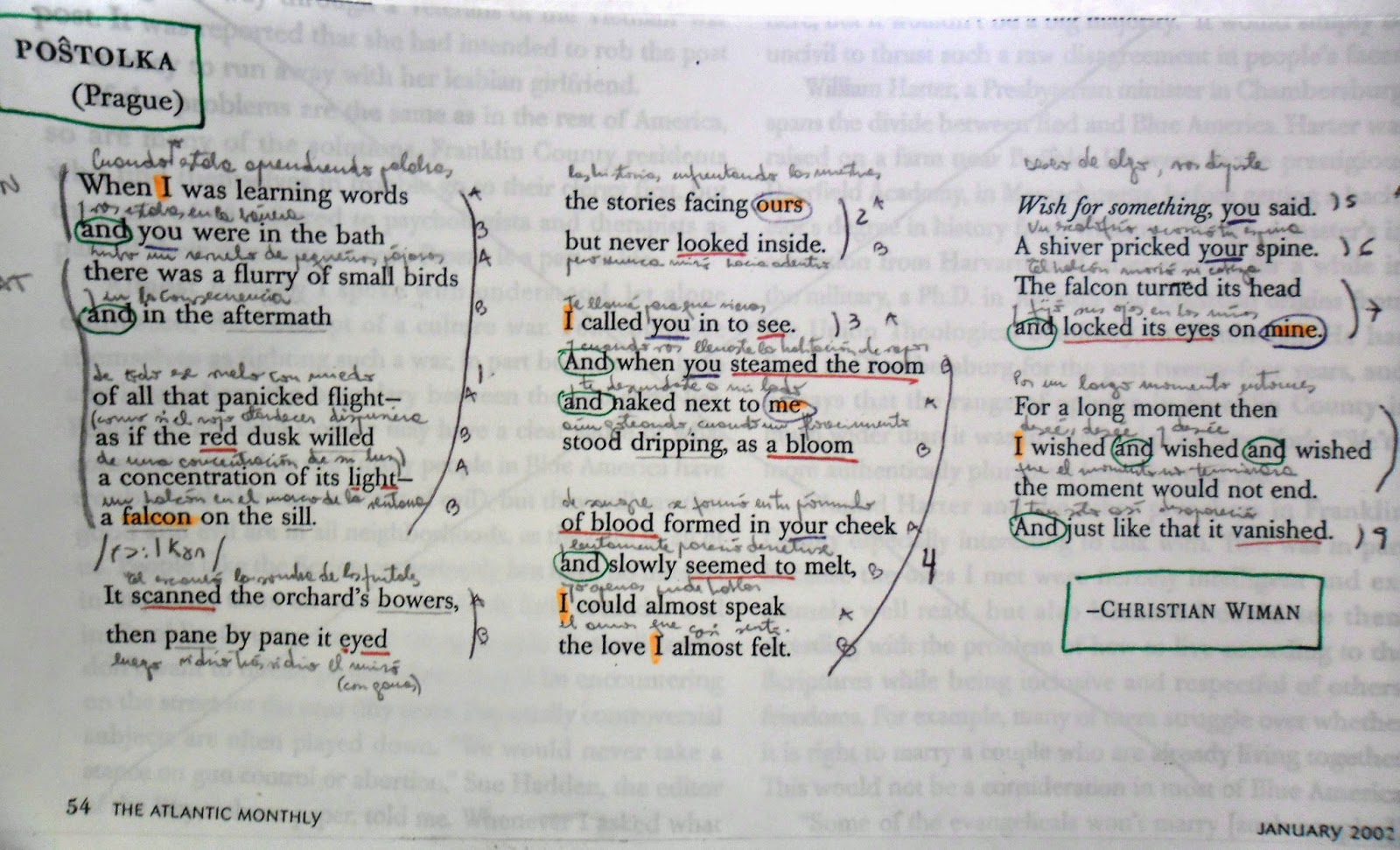 The poem is very visual. Throughout the poem there are verbs and words related light, vision and flight: “red dusk” (red color image), “a concentration of its light”, “scabbed”, “eyed”, “looked inside”, “I called you in to see”, “when you steamed the room” (white color image), “as a bloom of blood” (red color image), “seemed to”, “locked its eyes on mine”, “vanished”.
Both the rhythm and the sound of words themselves contribute to the meaning of Poštolka. In the first verse there are many words containing the “W” sound, like “when, was”, “were”. The rhyme pattern is ABAB. There is alliteration in “bloom of blood”. The voice in the poem is in first person but the point of view is omniscient and circular. It starts in a room, probably a place for study. “When I was learning words”, “it eyed the stories facing ours”, then the bird on the sill takes a view of the place. Then it shifts to the woman´s body, then to the woman and the narrator, then again to the narrator. The writer writes as if mirroring words: corresponding pairs. The repetition of the word “almost” shows the narrator´s emotion of that moment. The same as in “I wished and wished and wished” at the end of the poem. The, “For a long moment I wished and wished and wished the moment would not end”. Also, “When I was learning words and you were in the bath...” “pane by pane”. 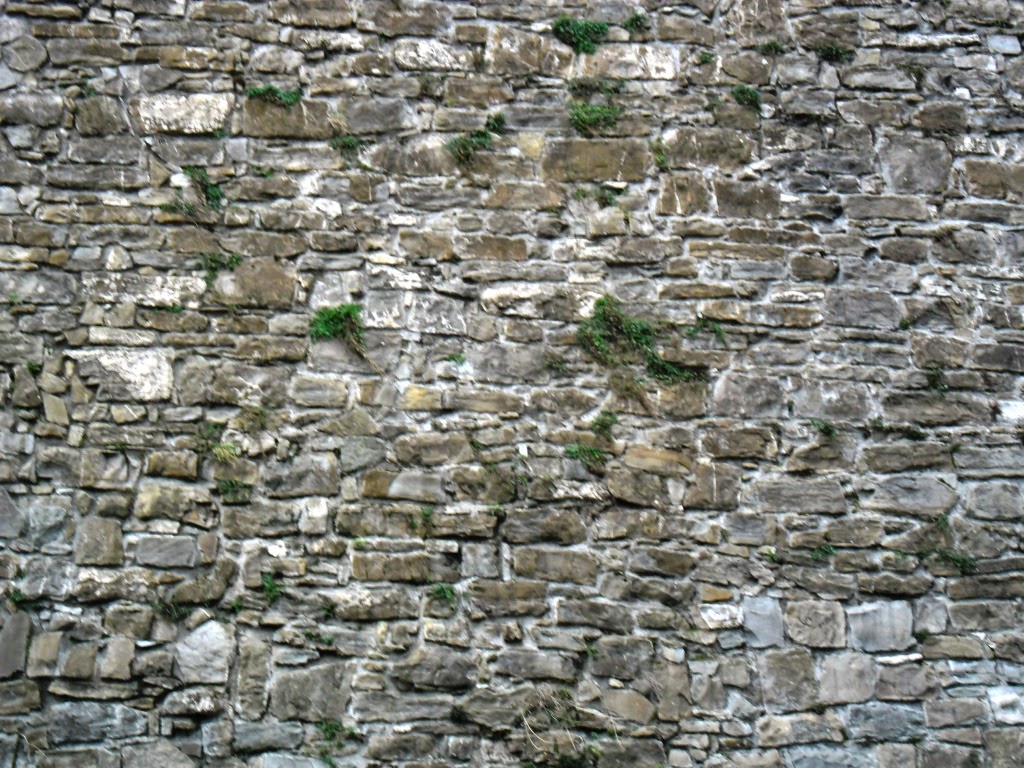 The use of pronouns and personal references is very interesting. The references to “you” and “I” are fairly similar in number. There are five “I”, one “ours”, one “me”, one “mine and then four “you” and two “your”. The use of “it” to replace “the falcon” is notorious because it gives more strength to the idea that the falcon is just an incident in these people´s lives. The word falcon itself appears two times in the poem, near the beginning, in the second verse and towards the end, in the sixth verse.
Through an eventful moment in his life, the author of Poštolka makes us think about deeper topics. He represents his world in the poem and readers see that representation in the text: Life as a continual change preceding death, as we are always in process.
Corina Moscovich
Posted by Corina Moscovich at 28.4.14 No comments:
Labels: English
Newer Posts Older Posts Home
Subscribe to: Posts (Atom)