History of Golden Lane
The basis is an irregular strip of land varying in width from four to 8 metres between the older, Romanesque walls from the 12th century, and the later walls that form the north fortification of Prague Castle on the edge of natural ravine known as the Stag Moat. Work there was begun by the architect Benedikt Ried shortly after 1484, when King Vladislav Jagiellon decided to leave the Old Town and settle at the Castle. 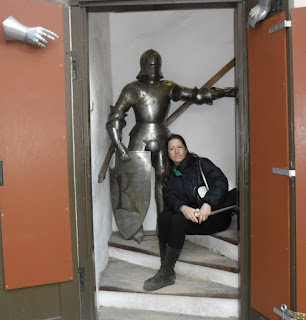 Attached to the Castle wall (up to 320cm thick) were 3: The Powder Tower (or Mihulka) on the west side, the Dalibor Tower (Daliborka) on the east, and between them the White Tower. Between Daliborka and the White Tower, the castle wall on the moat side was buttressed by an arcade with 12 identical vaults each of which was about 120cm deep and 600 to 660cm wide. These half-build spaces were used as simple makeshift dwelling. The oldest written reports about them are from the 1560s, when the lane was called Goldsmith's Lane. Its residents were probably lesser goldsmiths who had fled the guild laws which were being strictly enforced in all 3 towns of Prague at the time (Old Town, New Town and Lesser Town).
No substantial repairs were carried out on the northern castle wall until 1591-94, during the reign of Rudolf II. At that time, the upper arcade structure rose to the level of today's Golden Lane. There were now 21 arches between the White Tower and Daliborka, each 400cm wide and 220cm deep on average. They were separated by pillars about a metre wide. Above them, a walled passage with a raftered ceiling was built. The earlier houses were undoubtedly torn down at that time, and their remnants vanished into the raised rampart of the moat.
In 1597 the "artillerymen at the gates of Prague Castle" asked Emperor Rudolf II for permission to build little rooms within the newly repaired walls. In a decree, dated 16th September 1597, Rudolf allowed them to be built. The "Red Artillerymen", as they were nicknamed because of the colour of their uniform, did not, however, receive the dwellings as gifts. They had them build at their own expense and also bought and sold them, first amongst themselves, and then with others who were not members of their corps. At first, these included various employees of the Castle (such as gatekeepers, guards, and bell-ringers) and later, people who did not live in Golden Lane but rented the little houses to others.
It was not long before the little houses began to expand into the lane with their additions and fireplaces. New additions were made also in the adjacent Romanesque wall and the wall of the Lord High Burgrave's residence. The street ultimately became so cramped that in some places it was less than a metre wide. Soon afterwards, in the slum clearance of 1864, all those extensions, stalls, and wooden sheds that had stood on the opposite side of the lane were demolished, and only the little houses along the north wall were left standing.
In 1953 the Office of the President of the Czechoslovak Republic bought all the houses from their owners. The overall arrangement of Golden Lane was completed in 1955 under the direction of the archited Pavel Janák. The last general reconstruction of Golden Lane was carried out in 2010-2011 when a new drainage system was build and the paving was renewed. The tiny houses were underpined and repaired. Many valuable elements were also restored. All of the colour facades designed by painted animator Jiøí  Trnka were renewed. 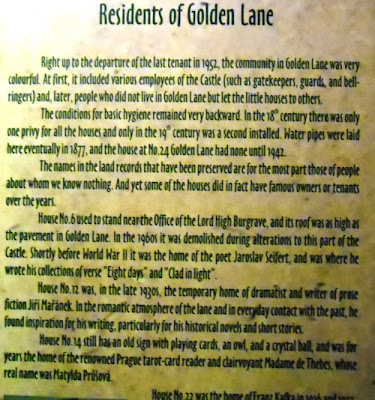 Residents
Right up to the departure of the last tenant in 1952, the community in Golden Lane was very colourful. At first, it included various employees of the Castle (such as gatekeepers, guards, and bellringers) and, later, people who did not live in Golden Lane but let the little houses to others.
The conditions for basic hygiene remained very backward. In the 18th century there was only one privy for all the houses and only in the 19th century was a second installed. Water pipes were laid here eventually in 1877, and the house at Number 24 Golden Lane had none until 1942. The names in the land records that have been preserved are for the most part those of people about whom we know nothing. And yet some of the houses did in fact have famous owners or tenants over the years.
House Number 6 used to stand near the Office of the Lord High Burgrave, and its roof was as high as the pavement in Golden Lane. In the 1960s it was demolished during alterations to this part of the Prague Castle. Shortly before World War II it was the home of the poet Jaroslav Seifert, and was where he wrote his collections of verse "Eight days" and "Clad in light".
House Number 12 was, in the late 1930s, the temporary home of dramatist and writer of prose fiction Jiøí Maøánek. In the romantic atmosphere of the lane and in everyday contact with the past, he found inspiration for his writing, particularly for his historical novels and short stories. Now in this house is Comedia Film.

House Number 14 Little house of the psychic Matylda Prùšová (1º half of the 20th century). In this house, before the Second World War lived the proclaimed Prague  card reader and fortune teller “Madame de Thebes”. This widow of a pharmacist  whose real name was Matylda Prùšová, was drawing attention from afar with her black clothing and old fashioned hat adorned with ostrich feathers. Since 1914, she has waited in vain for the return of her son from the First World War. Daily she laid a table and prepared a bed for him. Into her cozy room, stuffed with bizarre objects (an owl, a crystal ball, etc) customers arrived daily, desirous to look into their future.  Matylda´s clientele reached beyond the seas-letters for her, came for example, all the way from Cape Town. Because of her frequent predictions about an early end to the war and the fall of the Third Reich, she was arrested by the Gestapo and eventually tortured to death. 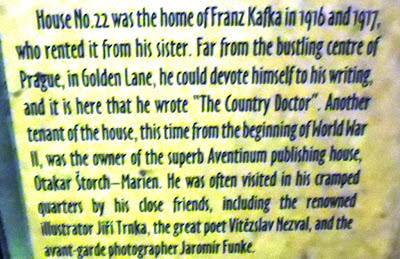 House Number 22 was the home of  Franz Kafka in 1916 and 1917, who rented it from his sister. Far from the bustling centre of Prague, in Golden Lane, he could devote himself to his writing and it is here that he wrote “The country doctor”. Another tenant of the house, this time from the beginning of World War Second, was the owner of the superb Aventinum publishing house, Otakar Štorch - Marien. He was often visited in his cramped quarters by his close friends, including the renowned illustrator Jiøí Trnka, the great poet Vítìzslav Nezval, and the avant-garde photographer Jaromír Funke. 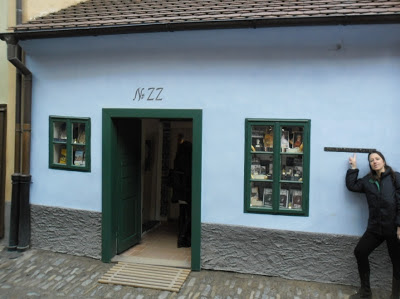 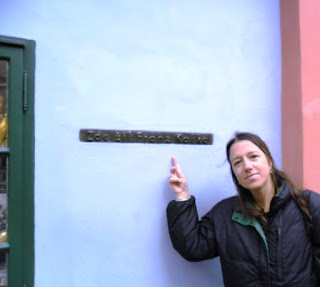 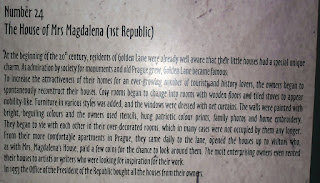 House Nº 24 Mrs. Magdalena (1º Republic). At the beginning of the 20th century, residents of G. Lane were already well aware that their little houses had a unique charm. As admiration by society for monuments and Old Prague grew, G. Lane became famous. To increase the attractiveness of their homes for an ever-growing number of tourists and history lovers, the owners began to spontaneously reconstruct their houses. Cozy rooms began to change into rooms with wooden floors and tiled stoves to appear nobility-like. Furniture in various styles was added, and the windows were dressed with net curtains. The walls were painted with bright, beguiling colours and the owners used stencils, hung patriotic colour prints, family photos and home embroidery.                                   They began to vie with each other in their over-decorated rooms, which in many cases were not occupied by them any longer. From their more comfortable apartments in Prague, they came daily to the lane, opened the houses up to the visitors who, as with Mrs. Magdalena ´s House, paid a few coins for the chance to look around them. The most enterprising owners even rented their houses to artists or writers who were looking for inspiration for their work.