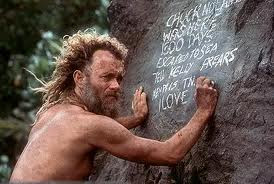 With Tom Hanks in the starring role, Castaway tells the real story of an engineer business man, who, flying from Russia to U.S.A. suffers a tragedy. Due to a major technical problem, his plane falls into the sea. Hanks character, the only passenger to survive, finds himself on a remote island where the only contact with human beings is in his memory. He spends approximately four years on that island until he is found asleep, lying in a hand made boat. This event means his coming back to civilization and it represents a turning point in the film. 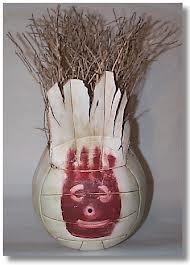 Castaway has many visual symbols. One of them is a ball the main character found in a parcel which appeared in the island after the catastrophe. As time goes by, the ball is the only companion Hanks has. It is a film where tears and laughter mingle copiously. But, while you are laughing, you may find there is no reason to laugh. However, comedy and drama started in primitive society, with very few resources but a great deal of imagination...
While you are watching the film, you can almost feel the frustration and loneliness and the pain that Hank feels. Castaway is about the fight for survival and it is this which makes the film relevant. At some stages, you may find yourself deeply shocked, as the film gives you the sensation that every single detail was real.
You start thinking what would you do in his place and what and who would you miss. Not only is survival emphasized but also the human need of others.
I enjoyed this film because it helped me to see the world from a different angle, to put myself in a lonely person’s shoes.
Corina Moscovich 23-05-01

To leave your comment clik on “comentarios”, you will see a pop up window where you can write it. Just below, you decide how you want to identify (Google; anónimo; nombre/URL). Translations to other languages are welcomed. Please contact me to corinamoscovich@gmail.com
Posted by Corina Moscovich at 23.9.12 No comments:
Labels: English
Newer Posts Older Posts Home
Subscribe to: Posts (Atom)