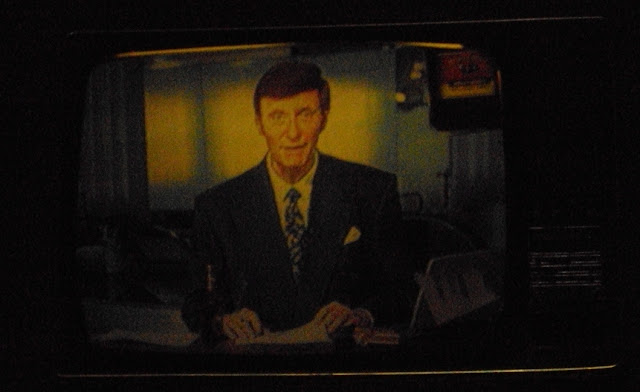 I took this picture on a "fixed old tv, with that image pasted on it" in a pub called “die mystic boer”, Bloem's most popular pub and live music venue (http://www.diemysticboer.co.za/). Of course, I did not know who he was. Almost a year later, I am writing a post about Riaan... According to one of my South African friends, “Riaan still looks the same as 30 years ago. He also read the news in Stander, a movie about a famous policeman that robbed banks here many years ago and who was kind of a hero”. He also has an interesting biography: Riaan Cruywagen, born on October 5, 1945 is a South African television news reader and voice artist who has been associated with the South African Broadcasting Corporation since its first television broadcasts in 1975.

The name Riaan Cruywagen has become synonymous with Afrikaans television news through his lengthy career. In the mid-2000s, following the contract renewal issue, Cruywagen was once more the focus of popular culture in for a time, when a number of e-mail and internet jokes originally referring to Chuck Norris and David Hasselhoff were modified by using his name in their place. South African-themed jokes in a similar vein were also circulated, mostly related to his perennially youthful appearance and intellectual prowess.In 1976 Cruywagen was also a voice artist for the character "Haas Das" on a popular Afrikaans children's news program. He also voiced the character when it was revived in the movie "Haas Das hou konsert" in 2007. He also voiced numerous characters in another children's programme.
He also appeared in an ad-campaign for ATKV/Pendoring, as a waitor in a restaurant with a board on the wall saying:" Moenie die taal afskeep nie! / Don't disrespect the language!"-referring to Afrikaans. Cruywagen has appeared in a number of films, playing himself as a newsreader, including an appearance reading the news in Zulu in Leon Schuster's "Sweet 'n Short". He was also seen in Stander as a nostalgic reminder of his long career as newsreader.

In Argentina we have a guy who looks quite similar to Riaan. His name is Silvio Soldán.

Here you can read information about him in English http://www.todotango.com/english/creadores/ssoldan.asp. It is interesting to find such a reference in my own country. You can compare both pics.... Here you can find more interesting information about him, but in Spanish. Acá pueden encontrar más información sobre Silvio, en castellano: http://www.tipete.com/userpost/imagenes/silvio-soldan-el-post-que-al-fin-se-merecia-imagenes-gratis


Although Riaan and Silvio are two different people with different lifestyles and background, they may have a lot in common.
What about your country? Can you think about someone like Riaan?