I met Vyacheslav in , in 2007, when he came here in order to be part of a Poetry Festival. It was a little difficult to communicate, at the time he did not speak much English or Spanish. But still, we managed to have some conversations. Maybe the starting point was my last name (Moscovich) and a common love for poetry.
Vyacheslav provided me with the picture and the following information about him, through email, and also some of his poems, translated by  Dasha C. Nisula. Enjoy! 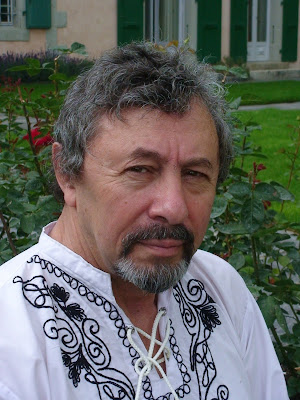 Vyacheslav Glebovich Kupriyanov was born in Novosibirsk in 1939.  His first published works were translations of poetry from German (Hölderlin, Novalis, R.M.Rilke, Hoffmannstal, B.Brecht, G.Grass, Enzensberger, Hans Arp, Erich Fried) and English (Walt Whitman, Carl Sandburg).
Kupriyanov studied technical sciences in the High Navy School in Leningrad (1958 - 1960),  and graduated in 1967 from the Moscow Foreign Language Institute (now Linguistic University), section of math linguistics and German (1967). He is a freelance writer, a member of the Moscow Writers Union, and a member of the Serbian Writers Union.
His published works in poetry include: "First person", 1981 (), "Life goes on", 1982 (first free-verse poetry published in after the Second Wolrd War); "Homework", 1986; "Echo", 1988, 1989; "Poems", 1994; “THE BEST TIME”, 2003.
His published works in prose include: "The shoe of Empedokles" (Novel), 1996, 2000 (), and short stories (including science-fiction) published in various magazines. His translated works include: In English:  "In Anyone's Tongue" (London & Boston: Forest Books, 1992)(dual text, Russian and English); in German: "Moist manuscript" ("Das feuchte Manuskript", Roman), 1991, Alkyon Verlag, "Der Schuh des Empedokles", 1994, 1999; Poetry: "Sober echo", 1986, (LCB-Edition); "Challenge to flight", 1990;  "How to become a giraffe"; 1991, 1999;  "Monument to the Unknown Coward", (Delp Verlag, 1990); "Eisenzeitlupe", 1996, (awarded first place prize in Südwestfunk-Bestenliste, 1997); »Short Stories of Eurasia«, Alkyon Verlag, 2001, “Mitlesebuch , Aphaia-Verlag, 2006; In Bulgarian: "Unknown Wonder", 1987; "The Oase of Time", 2000; in Polish: "The Circle of life", 1986; in Serbian: "Singing lesson", 1987; "Report on an angel" (awarded Library of  European Literature Prize, 1988). “The Heaven of earth”, “Branko-Radicevic-Prize” – 2006; in Dutch: "The feelers of earth", , 1988; in Tamil (): "Modern poems", , 1988; in Macedonian: "Singing and thinking lessons", Struga, 1999.
Here are some websites with information in Russian and in German:
http://stihi.ru/avtor/kupr
http://www.erata.de/autoren/kuprijanow
TRANSLATION OF POETRY
The flash of the birds' flight
Translates to somnolent scurrying of the fish
And back
From the ancient language of fish
To the contemporary syntax of the birds' flight
And so on
From the dark language of the ocean
To the clear language of the sky
And back
TO THE STATISTICIANS

the quantity of brains
per capita

the quantity of ideas
per brain

the quantity of opinion
per idea

the quantity of rumors
per opinion

then Catherine also the Great
arranged a connection with the better world
of Mr. Voltaire then Napoleon
the very Bonaparte in continuous burning
of helped introduce
the elegant French epistolary style
for nobility so as not to confuse
the common folk
too early with
freedom equality and fraternity

When my ship moors at the shore,
a poem will come ashore with me,
To which before only the sea was listening,
as it was competing with the call of the sirens.
It will have only soft vowel sounds,
That sound like this in pale translation
From the language of roaming to the language of mooring:

I love you with the hoarse cry of the seagulls,
With the scream of the eagles, flying toward the scent of Prometheus' liver,
With a thousand year silence of the sea turtle,
With a click of the cachalot that wants to be a roar,
With a pantomime, executed by the tentacles of the octopus,
Before which all seaweeds stand on end.

I love you with all my body coming from the sea,
With all its rivers, tributaries of the Amazon and the ,
With all the deserts, considering themselves seas,
You hear their sand sift through my desiccated throat.

appearing at the juncture
of rising and
declining knowledge
RUSSIA'S DREAM
sleeps in cold dew
and dreams
that it is :
its chatterers are congressmen
its loafers are the unemployed
its hooligans are gangsters
its drunkards are drug addicts
its profiteers are businessmen
its Russians are Blacks
and it must fly to the Moon

and again falls asleep
and stirs a Russian idea -
that sleeps and dreams
that it is
LANDSCAPE WITH POLYPHEMUS
All this is reflected:

still hasn't fallen
through the
onto free

still
hasn't been swallowed
by the

Icebergs of
haven't succeeded in
merging with the ice
of